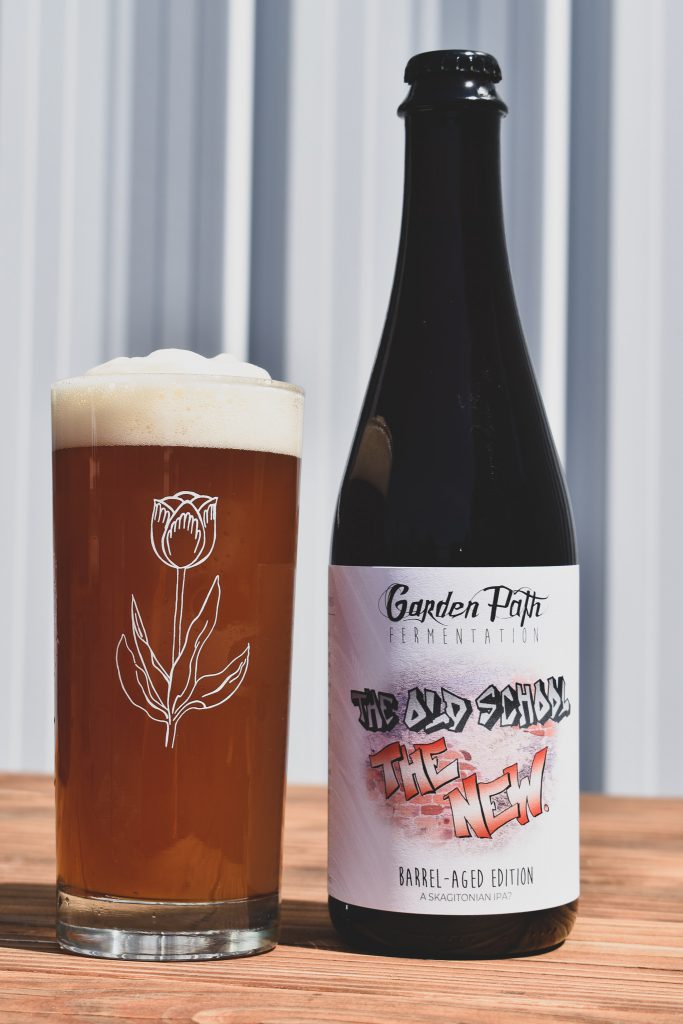 These were words we continue to hear often from customers coming to check out our brewery for the first time.  We began hearing them when we first opened our tasting room in April, 2018, when we were only serving guest products, while waiting for ours to be ready.  Our attempts to explain that were, more often than not, met with a look of bewilderment and a follow-up question as to when our IPA would be ready.  When we then went on to explain that our focus was on native yeast fermentation using local ingredients, and that we had no plans to make an IPA, as such, the bewilderment would sometimes transition to a mild panic.

Following multiple renditions of this same conversation, we finally decided to give in.  We’d make an IPA, but we’d make it our way, drawing inspiration from what IPA once was, using some of the richer, darker malts that Skagit Valley Malting had to offer, and an abundance of soft, mild, Pacific Northwest-grown noble-type hops, all fermented with our house culture of 100% native yeast.  Uncertain as to both how well this would work and how well it would be received, given that it was in many ways the polar opposite of what modern IPA had become, we started with a 5 gallon pilot batch, which, following primary fermentation, we racked into a single keg.  After giving it a few weeks to keg-condition we sampled it and decided not to put it on tap.  Our consensus was that, while far from the worst thing any of us had ever consumed, it was a bit harsh and disjointed and just wasn’t something that we wanted to put out there as our introduction to the world.  Rather than dump it, though, we set the keg aside with some other experiments in progress and shifted our attention to other things.

Several months later, upon coming across the keg in the experiment pile and deciding to give it another try, we were pleasantly surprised at how it had evolved and matured.  The once disparate flavors had come together into something complex, sophisticated and highly enjoyable.  We transferred the keg to the tasting room, still dubious about how it would be received by those looking for and expecting a more typically modern rendition of IPA, but were pleasantly surprised to find that our customers seemed to enjoy it as much as we did.  When we stopped and thought about it, it made total sense–the original IPA wasn’t meant to be consumed young; it was designed to withstand the long voyage from England to India, during which it would have an opportunity to mellow and coalesce, much as our AntI.P.A. had done.

Once we realized how much both we and our customers had enjoyed this beer once it was given the time it required, we knew that we needed to try something similar on a larger scale.  The pilot recipe utilized whole flower hops, however, which we felt were important to the overall character of the beer, but which we could not use in Chuckanut’s brewhouse, which was designed to work exclusively with pelletized hops.  So we decided to improvise. 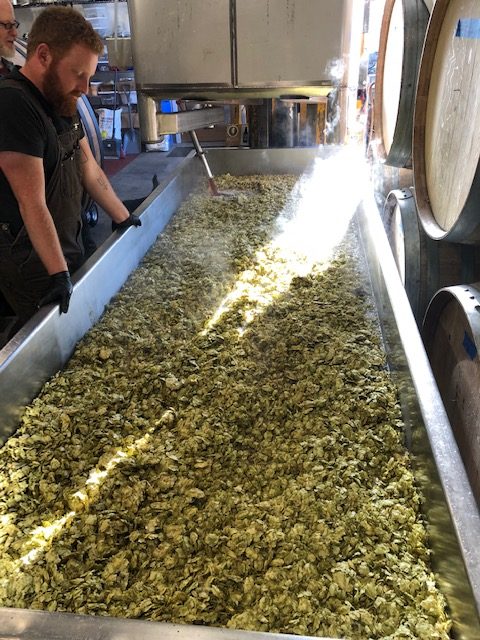 A typical batch at Chuckanut was enough to fill 350 gallon IBC totes, which we’d use to transport the wort back to Garden Path for fermentation in our open foudre.  Ordinarily, the wort would pass through Chuckanut’s heat exchanger in order to bring it down to fermentation temperature prior to transport, but for our first foray into spontaneous beer we’d split the batch and brought half back hot to sit overnight in our coolship, allowing it to become naturally inoculated with airborne microbes as it cooled.  We decided to use a variation of this same process with our AntI.P.A., in this case, filling the coolship with whole flower hops, upon which the hot wort was allowed to steep as it cooled.  Meanwhile, we began fermenting the cooled portion of the wort in an open foudre with our native house culture adding the wort from the coolship to the active fermentation the following day.  Though the wort in the coolship would have become inoculated with airborne microbes as it cooled, as was the case with the spontaneous beer, those microbes, in this instance, would be greatly outmatched by those already present in the actively fermenting wort and would be unlikely to have as significant of an impact on the finished product.  We’d actually used a similar technique with freshly picked hops not long before, in the making of our first edition of The Wet Hopped Ship.

The full-scale batch of AntI.P.A., which we first brewed on October 16, 2018, was packaged while still quite young on November 7, 2018 and then naturally-conditioned in bottles and kegs for 2 ½ months prior to being released as the first edition of The Old School the New.

We brewed the second edition just a couple of months later, in March 2019.  It switched up the grain bill a bit, incorporating Skagit Valley Copeland Vienna and Pilot Pale malts, along with the Copeland Dark we’d used.  The hops were also somewhat different, with Santiam in the kettle, in place of the Cryo Simcoe we’d used the first time, and whole flower Willamette in the coolship, along with Cascade, in place of Sterling and Santiam.  Once again, we packaged it while still fairly young, just 5 weeks after brewing, but this time, gave it a full six months conditioning prior to release, having found that the longer it aged, the more integrated and cohesive it would become.  I’m actually enjoying a pint from the final keg now, more than two years after it was brewed and continue to savor every last sip!

In November, 2019, just two months after we released the 2nd Edition, we brewed the 3rd edition.  This time, we used a base of Pilot Dark, Copeland Dark 80, and soft white club wheat, hopped with Crystal and Perle in the kettle, with the addition of whole flower Loral and Willamette in the coolship.  The fermentation went a little slower this time, as is often to be expected in winter months, so we decided to wait a bit longer to package it than we had with the prior editions.  We did so in late January, but even then, we thought there was a possibility that some residual fermentation might still be taking place, so rather than risking overcarbonated bottles, we decided that we would keg-condition a portion of the batch, while allowing the remainder to go through an extended secondary fermentation in oak barrels to ensure that it was fully dry at packaging time.

Then Covid hit and all of our production temporarily shut down.  What was initially intended to be one to two months of secondary fermentation in barrels turned into nine, during which time the beer continued to transform into a more complex and mature version of itself.  The hops had faded somewhat, and our native house culture had become the dominant force.  The end result was something we very much enjoyed, but something that we also felt had veered a bit too far from the theme that we’d come to define as The Old School the New.  The solution?  Well, add more hops, of course!  We dry-hopped it with a generous dose of Willamette, Crystal, and Mt. Rainier, with the latter two among the first dried whole flower hops that we were able to procure from our good friends at Hop Skagit and the first of their hops to be used in any of our beers other than The Wet Hopped Ship.

This weekend, we’ll be releasing the dry-hopped Barrel-Aged Edition of the Old School the New, which we packaged last October, and also tapping the first keg of the original 3rd Edition, which has now enjoyed over 15 months keg-conditioning.  The common history of the two versions will likely be rather evident to those who try both, but so will their distinctions and neither is likely to be exactly what you might expect when you hear the word “IPA”.  But when thinking about the IPA, of old, brewed before it was possible to source isolated, single-strain yeast from labs, aging for months in oak barrels as it slowly made its way around the world, we cannot help but ask ourselves whether what we’ve made may actually stand closer to those origins than much of what is now sold as IPA.

Buy The Old School The New.